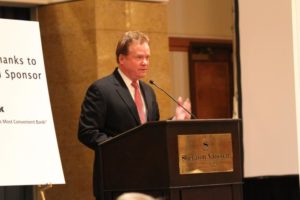 Speaking to the Arlington Chamber of Commerce this afternoon, Sen. Jim Webb (D-Va.) expressed strong support for the tax cut deal between President Obama and congressional Republicans, calling the compromise “an act of leadership.”

The keynote speaker at the Chamber’s 86th Annual Meeting, Webb said he’s encouraged by the president’s willingness to break with the Democratic base.

“What the president has done here is something I’ve been waiting for him to do for a long time, and that is to get out of the base of the party and move into where we need to be as Americans to solve the problems that we have,” Webb said. “There are things in here for everybody not to like, but that’s just what happens when you get into this business.”

Obama’s tax proposal calls for a two-year extension of the Bush tax cuts for all income brackets, a 13-month extension of long-term unemployment benefits, tax breaks for business investments, a weakening of the estate tax, and a 2 percent payroll tax production. Since the compromise was announced, the president has had to fight off criticism from members of his own party, who say the deal is costly and a boon for the rich. 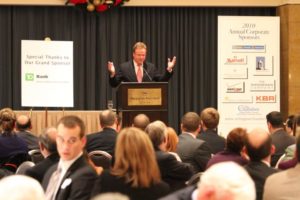 “It’s not a totally popular position inside our caucus at the moment, but I think we really do need to get this done for the good of the country,” Webb said. “It’s not a Republican issue, it’s not a Democratic issue, it’s an issue of how we get our economy going.”

Webb said lower taxes and continued unemployment benefits have the potential to greatly benefit the economy. In explaining why, he adopted the economic rationale cited by many Republicans.

“What all this has the potential of doing, in my view, is to stimulate our economy in a way that the TARP did not, and these other programs did not, because it’s going to put money directly in the hands of people who will spend it,” he said. “Study after study has shown that when you put money into unemployment benefits, it’s one of the fastest ways to recirculate money in your economy, because people aren’t going to hang on to it, they’re going to go out and spend it.”

Webb said simply allowing the Bush tax cuts to expire in January would be a mistake.

“People who don’t like this, I’m not sure they’re going to like what happens if they don’t pass it,” he said.

During the course of the speech Webb also questioned the wisdom of political maneuvering by the Democratic leadership in congress during the current lame duck session.

“Frankly and honestly, I really don’t think that it was a smart thing for our leadership to require us to take a whole series of symbolic votes that we knew we were going to lose,” Webb said.