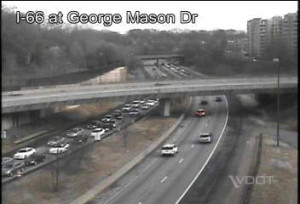 (Updated at 11:05 a.m.) There were major delays on westbound I-66 between George Mason Drive and East Falls Church this morning as police investigated a series of wrecks apparently caused by a airport shuttle van.

We’ve heard reports of at least six crashes caused by the van between the Roosevelt Bridge and Sycamore Street on I-66. At least two additional crashes have been reported outside of Arlington. We’re hearing that two drivers required medical treatment.

Police temporarily shut down the ramp from westbound I-66 to Sycamore Street to allow an ambulance to access one of the crash sites.

The Metropolitan Washington Airports Authority is now confirming that airport police have arrested the driver of a blue Super Shuttle van at Dulles Airport in connection with the crashes.

“Our officers located driver and the van in front of the main terminal at Dulles, and he was taken into custody,” said airport spokesperson Courtney Mickalonis. “We’re working with other police agencies to determine exactly what happened.”

Mickalonis said airport police were initially alerted by a motorist who was struck by the van on the Dulles Access Road. She added that police did not find any passengers inside the van. It’s not known whether passengers might have gotten out before police arrived.

No word on charges at this time, but we’re hearing that the driver spit on officers while being taken into custody.

Update at 3:30 p.m. — Virginia State Police have sent out an updated press release (after the jump). Note that VSP is only counting the incidents their troopers responded to, and we stand by our count of eight crashes.

At 9:24 a.m., Virginia State Police Senior Trooper J.T. Johannes was called to investigate three hit-and-run crashes that occurred near the 70 mile marker in the westbound lanes of Interstate 66. A blue “SuperShuttle” van was headed west on I-66 when it twice sideswiped the passenger side of a Dodge Charger. The van then rear-ended a Chrysler Pacifica, which caused the Pacifica to run off the right side of the interstate and into a ditch. Next a taxicab was struck from behind by the van. The taxicab ran off the right side of the interstate and struck the guardrail.

The driver of the Pacifica and her 1-year-old daughter were transported by ambulance to Arlington Hospital for treatment of minor injuries. The driver is a 33-year-old woman from Centreville. The driver was wearing a seat belt and the toddler was properly secured in a child safety seat.

None of the three individuals in the Dodge Charger was injured. The driver in the taxicab was not injured, either.

At 9:28 a.m., Virginia State Police Trooper B.G. Davis was dispatched to a hit-and-run crash that occurred in the westbound lanes of I-66 at the Dulles Connector Road/Route 267. A 2006 Mercedes C240 was rear-ended by the blue “SuperShuttle” van. The van failed to stop and got onto the Dulles Airport Access Highway.

The 47-year-old female driver from Alexandria was the only one in the Mercedes when it was struck. She was not injured in the crash.

Virginia State Police alone have charged Muhammed Teshale, 25, of the 4800 block of Kenmore Avenue in Alexandria, with one felony count of hit-and-run in Fairfax County. Additional state police charges are pending for the Arlington County crashes.

According to statements from witnesses and the van’s driver, the “SuperShuttle” was traveling westbound on I-66 between 90 and 95 mph.