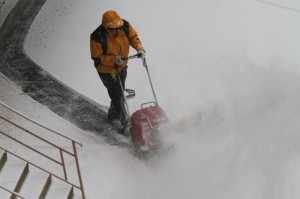 Out of the more than 15 accidents that have been reported in Arlington since the snow started falling, we haven’t heard of one on any of the major highways that criss-cross the county. Instead, it’s hilly side streets that are proving the biggest challenge so far today

Earlier we reported that North Veitch Street had been shut down near Lee Highway due to slippery conditions on a hill that led to a minor accident.

Now we’re hearing of big problems on at least three other hilly roads.

Five cars are stuck on Army Navy Drive just before South Joyce Street. Police are on the scene awaiting a salt truck.

Washington Boulevard is blocked at Kirkwood Road, according to a tipster, due to a car that can’t get up the hill. (Update at 2:15 p.m. — It’s back open “but still unplowed and slippery,” our tipster says.)

And at North Pollard Street and 30th Street North, near Military Road in the Bellvue Forest neighborhood, police have blocked off a couple of ice-covered roads. The ice reportedly caused a FedEx truck and a Arlington County school bus to slide down a hill. The FedEx truck struck and seriously damaged a car, we hear. No word on damage to the school bus, but crews have been spreading sand in an effort to allow the bus to get back up the hill.

Update at 3:55 p.m. — One or two school buses have been involved in a collision at Kirkwood Road and 14th Street North, according to police radio traffic. No injuries have been reported.