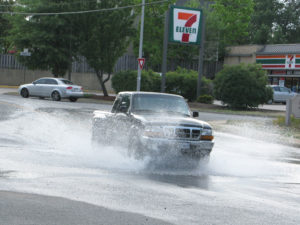 Dave Hundelt, WSS’s Chief Operating Engineer, says the “rash” of ruptures is notable, but not particularly unusual this time of year. Most water main breaks happen when there are significant variations in temperature, or when it gets so cold that the ground around the pipes starts to freeze.

Arlington, like other localities around the county, is considering ways to upgrade its water infrastructure. The county’s cast iron water main pipes date as far back as 1927. Most of the piping currently in place is from the 1930s, 40s, and 50s. While it has some time to go until it hits its 100 year expected lifecycle, older pipes are more prone to breaking, increasing maintenance costs.

“It is a problem that is national,” said Hundelt. “If we don’t reinvest in the system… we’ll just be paying for it in more unplanned breaks and reactive maintenance.”

The WSS bureau is currently pursuing a capital improvement strategy of relining some existing pipes every summer while replacing others. Hundelt says he hopes to pick up the pace of improvements, to get the county on a sustainable 100 year replacement cycle.

Such projects will have to be funded locally, however.

“There is not a silver bullet, federal answer for funding for that kind of stuff, at least not at this time,” Hundelt said.