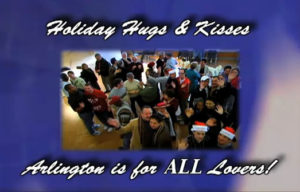 Earlier this month, dozens of lesbian, gay, bisexual and transgendered individuals, as well as their straight allies, gathered at Artisphere to shoot a video. The video, called Holiday Hugs and Kisses, featured just what its name suggests.

The purpose of the video was “to demonstrate broad community and regional support for LGBT people” in a “fun and festive” way, according to the Arlington Gay and Lesbian Alliance, which helped to organize the filming.

The video from the event, set to music, was released on Monday. Take a look here.

We know that even in a post-Don’t Ask Don’t Tell world, such a video will be controversial to some. In the spirit of the holidays, we ask that everybody please keep the comments section civil.