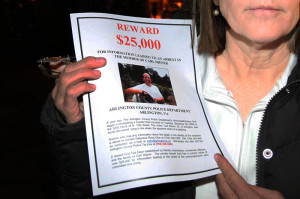 To those who knew him best, Carl Diener was a gentle giant. He was a tall, athletic, 57-year-old man who didn’t have an angry or selfish bone in his body.

What Diener was not was a likely crime victim. After all, he lived within the safe confines of Lyon Village and, if worse came to worse, he was one of the fastest runners of all his sporty friends.

Nonetheless, early in the morning on Tuesday, Dec. 29, 2009, Diener was beaten and stabbed to death near the intersection of 13th and Irving Streets in Arlington. The shocking crime has remained Arlington’s only unsolved murder since 2006.

Last night, about two dozen friends of Diener showed up at the intersection for a candlelight vigil. Many of those in attendance said they counted Carl as a close friend, speaking to his instantly likable, outgoing personality. 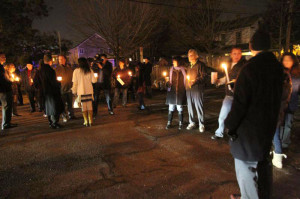 “There isn’t a kinder, gentler person on the planet,” said Tom Hostetler, who used to ride bikes and play racquetball with Diener.

“He was a guy who loved his friends and enjoyed life,” said Ed Hall, who knew Diener through his gym (Carl was a constant fixture at Arlington Sport & Health Club). “A lot of times when you hear about a murder on TV, people always say, ‘Oh he was a nice person.’ Carl really was.”

Diener, 57, lived alone in an apartment he first moved into 20 years prior. He had recently retired from a government job, and was on his way to his other job — opening Arlington Sport & Health in the pre-dawn hours — when he was attacked. Police say it was a random act of violence.

“He was a random victim, there’s no doubt,” said Det. Rosa Ortiz, the lead investigator in the case.

Friends say there must have been multiple assailants to overpower a man as in-shape as Diener.

“It was probably more than one, because Carl was a big guy,” said Michael Byrnes, who said he had played racquetball with Diener four time per week for the last 30 years. “It was a senseless, brutal act… in what we consider a safe neighborhood.”

Hall said Arlington’s relatively low homicide rate — there were two murders last year, and only one so far this year — is little consolation.

“They talk about, ‘Oh there were only two murders in Arlington County last year,” said Hall, his voice cracking with emotion. “Well, when it’s your friend, two is too many.”

Det. Ortiz was one of nearly a dozen officers and investigators who canvased the area around the crime scene last night, handing out about 500 fliers advertising a $25,000 reward in the Diener case.

Despite the fact that it has been one year since the crime with no apparent suspects, Ortiz says she’s hoping this latest push helps produce a breakthrough.

“What we’re trying to do tonight is trying to seek out information from people that perhaps saw what happened… to get people to call,” she said. “This is a whodunit, this is a stranger homicide and those are the most difficult to work. So we have to be very patient, and hopefully everything will fall into place soon.”