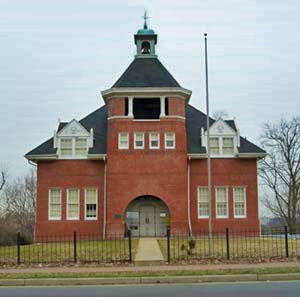 “Sometime in early December, thieves literally ripped off three 30 foot long copper downspouts from the exterior walls of the Hume School,” said Arlington Historical Society President Tom Dickinson. “This is a severe blow to our carefully shepherded finances, which were already in a precarious (deficit budget) situation. Although covered by insurance, we will incur a $1,000 deductible hit to pay for replacement downspouts.”

Dickinson said he’s meeting with a contractor today to get an estimate for the total replacement cost. He said that with the public’s help, he’s still hoping to catch the thieves.

“It would be interesting to know if any of your readers have contacts with scrap metal dealers in the area who might remember having seen these very long, dark brown tubes come through recently,” he said. “The price of copper has gone way up in recent months, thus making such brazen thefts more frequent.”

A photo of the Hume School is one of the finalists in this year’s county vehicle decal contest.

Anyone interested in donating to the historical society can do so online here or by sending a check to the Arlington Historical Society at P.O. Box 100402, Arlington, Virginia 22210-3402.