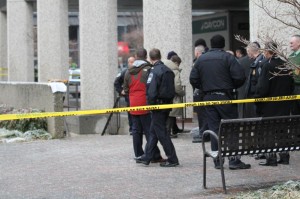 A man died this morning after falling from a secure government office building in Crystal City. Initial reports suggest the man may have purposely jumped from a second floor balcony into an outside stairwell adjacent to Crystal Drive.

The building, which houses a number of Department of Defense offices, is located at the corner of Crystal Drive and 18th Street. Arlington County Police, Pentagon Police and other federal law enforcement officers were at the scene of the incident, which occurred shortly after 11:00 this morning.

Shortly before the incident, a Twitter user reported seeing a man in a suit jump onto the tracks at the Crystal City Metro station as a train was approaching. The man then jumped back onto the platform and ran out of the station, the user said. It’s currently not known if the two incidents are connected.

If you or someone you know is experiencing thoughts of suicide, help is a phone call away. Call the National Suicide Prevention Lifeline at 1-800-273-TALK (8255).