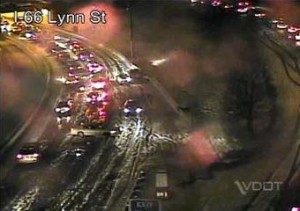 (Updated at 11:00 p.m.) The snow has stopped falling, but hundreds of motorists are still stranded on area roads and highways.

Drivers have been stuck on the George Washington Parkway for 5-6 hours now, according to various reports from Twitter.

The fact that there are no traffic cameras along the parkway has made it difficult to see exactly what’s going on, but Twitter users are reporting that downed trees are blocking all northbound and southbound lanes.

“My mother’s been there for 6 hours,” said one user.

“I have a friend who has been there since 5pm. She says cops are walking up and down, people are huddling together in cars,” said yet another.

Westbound I-66, meanwhile, has been at a virtual standstill since about 7:00 p.m.

Icy conditions and numerous accidents have made the two-lane highway impassable for much of the night. 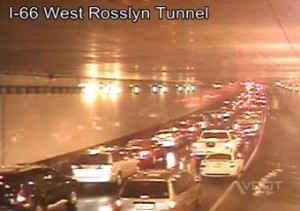 “It’s been incredibly difficult getting equipment to trouble spots due to the heavy congestion but I believe it is being cleared and traffic is slowly moving now,” said VDOT spokeswoman Joan Morris.

Currently, there’s a large backup before the Rosslyn tunnel. Traffic is moving along single file past 21st Street, with a stalled car blocking the left-hand lane.

Earlier, Virginia State Police spokeswoman Corinne Geller said the reason why it was taking so long to get traffic moving was because the traffic itself was preventing crews from treating the roadway.

“There are vehicles that are stuck, and you have to get the vehicles out of the way before you can get the snow plows through to clear the road,” Geller said. “The shoulders aren’t wide enough, there’s not enough space to get the VDOT trucks through to treat roadways. So you have to clear the road, then get the trucks through to treat it. Then, as soon as you get it treated, more cars come through, someone loses control and it starts all over again.”

Geller said Virginia State Police responded to calls for 106 disabled vehicles and 56 crashes in Northern Virginia between 5:00 and 10:00 p.m.

At one point, Geller said, a state trooper was struck and knocked over by an out-of-control car on I-66 near Glebe Road. The trooper was not hurt and remained on the job, she said.