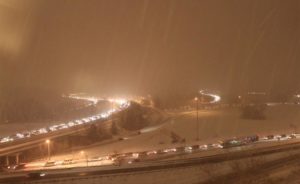 Talk to Virginia State Police, and part of the reason yesterday devolved into absolute gridlock has to do with everybody hitting the road at one time.

With the federal government getting out only two hours early, the roadways were already jammed with traffic as heavy snow started to fall around 4:00 p.m.

“Instead of having a staggered rush hour, like you typically do, you had everybody leaving at the same time… right as the storm hit,” said state police spokeswoman Corinne Geller. “Roads started deteriorating rapidly, and the vehicles started sliding into one another.”

Then, as gridlock set in, a new problem cropped up. 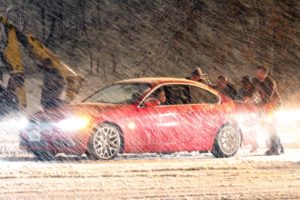 “The greatest challenge for clearing the interstates Wednesday evening in Northern Virginia was the sheer volume of abandoned vehicles,” Geller said. “Motorists were simply walking away from their vehicles – many of them being left still in the travel lane.”

Dominion Power, VDOT and Arlington County have all said that their efforts to restore power and clear streets were hampered by traffic and abandoned vehicles. In other words, if there were fewer vehicles on the streets, the streets would have been cleared earlier and not as many of the 16,700 Dominion customers without power last night would have been in the dark.

So should employers, including the federal and county governments, have let employees out earlier, given the early predictions of heavy snow around rush hour?

I think the decision by County officials to keep employees at work until 5 p.m. should be seriously questioned. Our department sent most of our out of county employees home early, but a core of Arlington residents remained. By the time the County closed its offices those employees were placed in life threatening conditions.

The storm was not a surprise. I can understand not closing early on a forecast alone. But once “whiteout conditions” are verified in Sterling and heading our way, employee safety should take precedence over previously announced plans.

Some of our employees required 7 hours to get home IN THE SAME COUNTY. Many are single women without somebody to assist them in an emergency.

The County manager is very lucky that today’s headlines did not feature employee deaths. It was a very bad decision to ignore facts on the ground for the sake of public relations. After 4:00 almost no citizens even ventured into the County building anyway. And employees were forced to sit and watch their situation become more and more desperate.