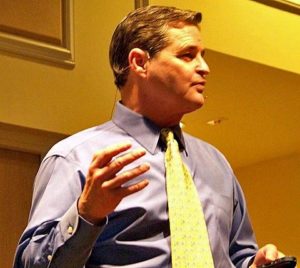 “I’ve been actively considering this for the past two weeks,” Maibach said in a phone interview. He expects to announce a decision by the end of the month.

Maibach has a long resume that has led him from his native Illinois to California’s Silicon Valley to the Washington region.

As a junior at Northern Illinois University, Maibach was the first American under the age of 21 elected to public office following the passage of the 26th Amendment.

In the 1980s, Maibach worked as an assistant and later an executive with the Intel Corporation. He unsuccessfully ran for congress in California in 1992. He moved to Alexandria in 1997, while serving as head of Intel’s government affairs office.

Maibach now serves as President and CEO of the European-American Business Council.

Citing his “markets and innovation” experience, Maibach says that he would campaign on a pro-growth and pro-business platform, should he decide to run.

“I have a lot of affection for state government,” he said. “States are in charge of the business climate of the country.”

Sen. Ticer is widely expected to retire this year. Three Democrats — Del. Adam Ebbin, Arlington School Board Chair Libby Garvey, and Alexandria City Council member Rob Krupicka — have all said they would seek the seat if Ticer declines to run for another term.

Yesterday former congressional candidate Patrick Murray quashed rumors that he may be interested in running for Ticer’s seat this fall, saying that “it’s too soon” after his last campaign.