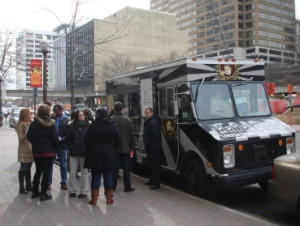 A food truck with atmosphere and sandwiches with strange names had office workers in Rosslyn lining up Friday to get a taste of the “Bing.”

Bada Bing DC parked near the Rosslyn Metro station, offering their assortment of cheese steaks and Spiedies – cubed meat marinated in herbs and spices, cooked over a flame and then sandwiched with toppings in between a submarine roll.

Mozzarella cheese, tomato, barbecue sauce, and cheddar cheese were just some of the ingredients available for Spiedies.

The sandwiches on his menu all have their own names like The Don Ho, with soy ginger glaze, carrots, green onion and crispy rice noodles.

With its unique menu and being in operation since October by a former New York City chef, the Italian-themed Bada Bing DC is a quick escape from the ordinary.

“I wanted to start out on my own and this isn’t really the economy to open a new restaurant, so this was a great option for me,” said chef and owner Nicholas Terza]ella.

Rosslyn’s been good to Terzella, but the Spiedie name comes from the town where he’s from: Binghamton, N.Y.

“A lot of people think of the Sopranos when they see the name but it’s really from where I grew up. When people there referred to Speidies the would always say “where are the ‘Bings?’” he said.

His prices are comparable to other food trucks in the concrete jungle, between $6 and $8 for an entrée.

This summer, he plans to begin operating a second truck just across the river in Washington.