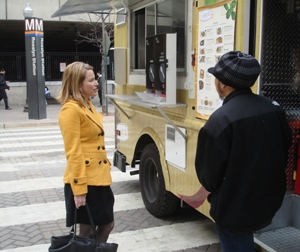 It was one of the few things on the menu with ingredients she recognized, and because it was the first time she’d seen the truck in the neighborhood she wanted to give it a try.

Last week was the first week Sauca had set up shop in Virginia, offering dishes like Mumbai Butter Chicken with garam masala and saffron rice, the Mexicali Fish Taco with mango pico de gallo and hot chili sauce, and the Medi Veggie with hummus, kalamata olives and dill yogurt sauce.

“I came because it looked interesting to me and I wanted to try it, and it’s close to my work,” said the Hornbaker, a consultant.

Before coming to Rosslyn, the Sauca truck spent its days in Washington’s Northwest and Southwest neighborhoods, building buzz and a loyal group of eaters with a taste for international flair. They hope to do the same here.

“I’ve worked in regular sit-down restaurants before, but driving this food truck is much different because fewer people have the chance to complain. They just come up, order the food and they’re done,” said 24-year-old Paulo Alfaro of Alexandria.

There wasn’t much complaining going on where Sauca was parked Friday, near the Rosslyn Metro station on N. Moore Street at Metro Park.

They’re also side dishes to be had, like the charred curry potato salad and tropical black bean salad.

Sauca’s chefs, who were busy filling orders while we were there, say they want to provide a taste of the world to customers wherever they are.

Entrée prices range between $7 and $8.