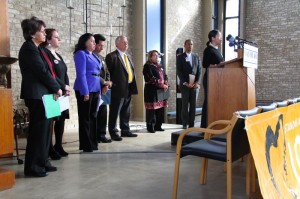 Local supporters of immigrant rights held a press conference in Arlington today to voice their opposition to a slew of anti-immigrant legislation in Richmond.

Speaking in front of TV cameras and about 15 audience members at the Unitarian Universalist Church on Route 50, immigrant advocates said the bills represent the kind of “divisive, partisan politics” that Virginia’s immigrant community has “always feared.”

“Now more than ever we cannot be silent, we have to act,” said Dr. Emma Violand-Sanchez, an Arlington County School Board member and a board member of Northern Virginia Community College. “We have to defeat all these anti-immigrant bills.” 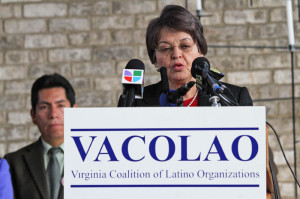 Violand-Sanchez said she was particularly concerned about HB 1465, which passed the Virginia House of Delegates by a vote of 75-24. The bill would deny undocumented students the opportunity to attend public colleges, including community colleges, in Virginia. Violand-Sanchez said the bill would affect about 200 undocumented Northern Virginia Community College students who are currently paying the out-of-state tuition rate.

“We cannot create a permanent underclass of marginalized young people who are not allowed to continue to their education,” she said. “These students work hard to pay for their education… Will we close the door to them now?”

Melanie Maron Pell, Director of the American Jewish Committee of Washington, which supports immigrant rights, said there’s an economic argument to be made for the defeat of HB 1465.

“Are these not the young people we want in our society and in our economy?” she asked. “It’s simply bad public policy… Let’s stop punishing kids for the actions of their parents.”

Here are three of the dozen or so other bills that the Virginia Coalition of Latino Organizations — which organized today’s press conference — is actively opposing:

The bills have all passed the House and have now crossed over for consideration by the Democrat-controlled state Senate.

“We believe in the American values of opportunity, equality, fairness and compassion,” Violand-Sanchez said, calling for the Senate to kill the bills. “These values have been trampled by the House of Delegates.” 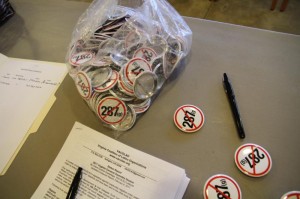 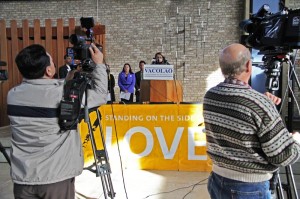