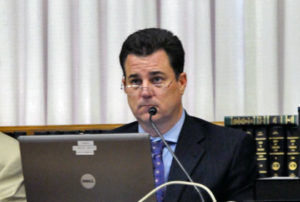 Another Fairfax County Republican is taking a legislative swipe at Arlington.

Del. Dave Albo has introduced a bill, HB 1421, that would prevent Virginia localities from restricting “the enforcement of federal immigration laws to less than the full extent permitted by federal law.” Any locality that does not comply with the order would risk losing state funding.

Ablo admitted that the bill is “directly targeted at Arlington,” according to a quote attributed to Arlington Del. Patrick Hope (D) by the Blue Virginia blog. Last year Arlington attempted, unsuccessfully, to opt-out of the federal Secure Communities immigration program.

“These proposals basically fall into two categories: bills that will add an undue burden and unfunded mandate on business and law enforcement, and the rest are just a meaningless restatement of federal immigration law,” Hope said in a statement this morning. “But what they all have in common is they are message bills. And that message is very simple: if you are an illegal immigrant, we don’t want you in Virginia.”

“The politics of blame is on full display this week in Virginia’s Capitol. Immigrants are to blame for Virginia’s poor economy, high unemployment, overcrowding in schools, and every other problem facing our Commonwealth,” Hope added. “I’m surprised they didn’t blame immigrants for last week’s snowfall. It’s a ridiculous blame game and is just plain wrong.”

Update at 4:05 p.m. — In a brief phone interview this afternoon, Albo refused to say that his bill is “targeting” Arlington, but he did say that Arlington’s effort to opt out of the Secure Communities program motivated him to introduce HB 1421.

Albo added that his goal is to expel every illegal alien from the state.

“In a perfect world, I would like to be able to kick out every single person who’s an illegal alien in Virginia,” Albo said, adding that doing so is difficult because “you can’t do it in a way that affects citizens and legal immigrants.”