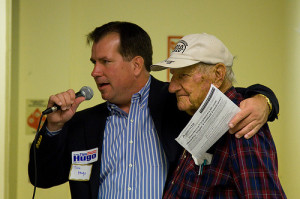 The Fairfax Republican who is threatening to quash a bill identified as one of Arlington’s top legislative priorities in Richmond has proposed several amendments to this year’s state budget bill that are sure to give Arlington officials reason to worry.

Del. Tim Hugo, the chair of the Virginia House Republican Caucus, is threatening to table a bill that would renew Arlington’s half-percent hotel tax surcharge, unless Arlington officials head to Richmond to explain the county’s controversial lawsuit against High Occupancy Toll lanes on I-395. So far, it does not appear that any members of the county board will be taking Hugo up on his offer.

But Hugo’s HOT lanes antagonism doesn’t stop there. He’s also proposing three Arlington-related amendments to the state budget bill, HB 1500. The amendments would deny state funding to the Columbia Pike streetcar project, require an audit of Arlington roads maintained with state funds, and would potentially cut off millions in state transportation funds to the region in the event that the HOT lanes project is canceled due to opposition from an individual jurisdiction (i.e. Arlington).

Would those amendments actually make it into the budget bill?

“It’s possible,” said Ben Tribbett, who runs the Not Larry Sabato Virginia politics blog, noting Hugo’s senior position as Republican Caucus chair. We have not been able to reach Del. Hugo for comment.

See the text of the amendments after the jump.

The following amendment is meant to discourage individual jurisdictions from preventing the construction of a HOT lane project.

If the construction of a high occupancy toll lane project that is located in more than one planning district is not constructed because of opposition from a metropolitan planning organization, an amount equal to all state and federal funds expended on such project shall be deducted by the Commonwealth Transportation Board from allocations pursuant to S 58.1-638 A. 4., Code of Virginia, to recipients in which the project is located.

The next amendment would deny state funds to Arlington’s Columbia Pike streetcar project.

The transfer of Columbia Pike from the Virginia Department of Transportation to Arlington County shall constitute the Commonwealth’s sole capital contribution to any transit project located on the Columbia Pike rights-of-way. No such project may be eligible for allocations, grants or reimbursements pursuant to S 58.1-638 A. 4.

The last amendment would require VDOT’s Inspector General to compare the condition of Arlington’s roads to those of other urban roads in the Commonwealth.

The Inspector General of the Virginia Department of Transportation shall audit the use of highway maintenance funds allocated to Arlington County for compliance with the provisions of S 33.1-23.5:1. As part of such audit, the Inspector Gneral shall compare the condition of Arlington roadways with those in other urbanized areas of the Commonwealth.”