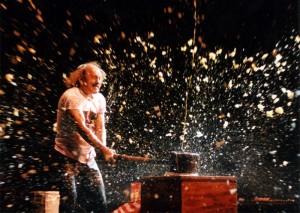 Two comedy legends will be coming to the Arlington Cinema Drafthouse (2903 Columbia Pike) in the next month.

Jon Lovitz, of Saturday Night Live and The Critic fame, will be performing a total of four stand-up shows at the Drafthouse on Friday, Feb. 25 and Saturday, Feb. 26. Tickets are $30.

The next week, on Friday, March 4 and Saturday March 5, the single-name comedian Gallagher will be bringing his unique brand of comedy to the Drafthouse.

Gallagher is best known for his 80s cable TV specials, in which he would smash watermelons and other objects with a huge mallet, to the delight of trash bag-wearing audience members. His stand-up act at the Drafthouse, however, will not include an appearance by the famous “Sledge-O-Matic.”

In the world’s most concise publicity email (total: 19 words), Gallagher’s promotional manager confirmed that the show will not include any fruit smashing.

“This means all comedy without the mess!” wrote Christine Scherrer. “It’ll be a great show.”