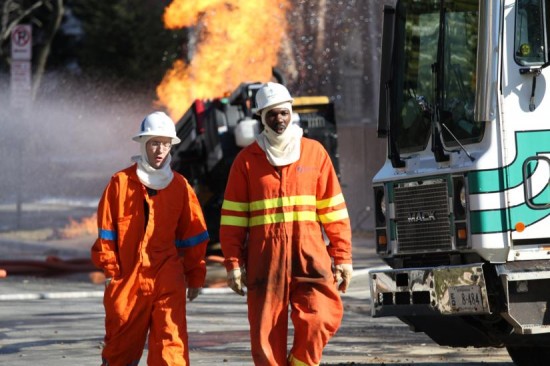 Update at 3:22 p.m. — The gas has been shut off the fire is out. Residents in the area can expect to be without natural gas for some time. Earlier:

A gas-fed fire is burning near the intersection of 12th Street and North Cleveland Street in Clarendon. Washington Gas has brought in heavy equipment in an effort to shut off the gas that’s fueling the flames.

The fire was apparently sparked after construction workers who were installing streetlights ruptured a gas line. Eight-foot high flames have been shooting up from the sidewalk since about 1:45 p.m. A construction vehicle is stranded next to the flames, but no structures are on fire.

Firefighters are on the scene spraying water on the flames to keep the vehicle’s gas tank from exploding. Police have shut down numerous streets. Firefighters have pushed the growing crowd, including Arlington Office of Emergency Management employees, farther back from the scene as a gas smell becomes more pervasive in the area.

Gas company workers, who had been trying to shut off the gas by turning ground valves, are now using a backhoe in an apparent attempt to reach a shutoff valve. 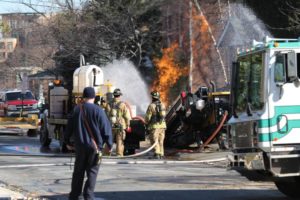 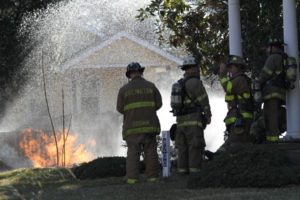 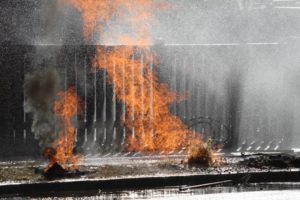 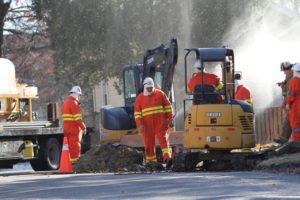