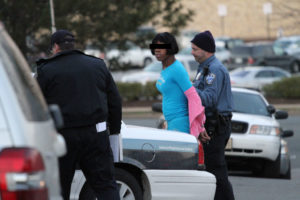 Just after 5:30 p.m., a call came in for two men chasing a woman down South Hayes Street. Later, the person being chased was described in police dispatches as a six-foot tall man dressed as a woman.

The man had allegedly stolen an item from a store in the Pentagon City mall, and the two men were identified as store employees.

The men chased the suspect into a condo complex on 15th Street, across from Costco. Police arrived and apprehended the suspect, who was handcuffed and later placed in the back of a squad car.

The store employees declined to reveal their employer but confirmed that they chased the suspect after a theft.

ARLnow.com was in Pentagon City on another story and was able to arrive at the scene shortly after the incident.