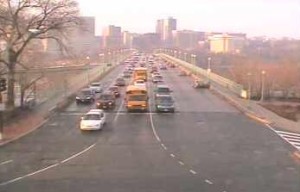 A D.C. police officer was struck by a car while investigating a deadly accident on the Key Bridge last night.

According to NBC 4, a person who was walking a moped across the Key Bridge was struck and killed by an SUV that then fled the scene. The officer was on the bridge investigating the accident when he was struck from behind by another vehicle.

The driver that hit the officer stayed on the scene and the SUV driver was later stopped in Maryland, NBC 4’s Tracee Wilkins reported. Both drivers are suspected of driving under the influence.

Initial reports suggest the officer briefly lost consciousness after being thrown into the striking vehicle’s windshield. He’s expected to be okay.