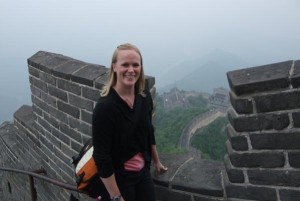 A 30-year-old Rosslyn resident was murdered Friday night during an apparent robbery at a Lululemon store in Bethesda.

Jayna T. Murray, a store employee, was found dead and a co-worker was found injured inside the upscale Bethesda Row store Saturday morning. Police say they were attacked by two men wearing masks and gloves around 10:00 p.m., after closing the store for the night.

In addition to her work at the Lululemon, Murray was close to completing an MBA with a concentration in marketing at John Hopkins’ Carey Business School, according to her Linkedin page.

A former Texas resident and a George Washington University alum, Murray was fond of traveling, running and other outdoor pursuits. On several occasions she posted on Facebook and Twitter about her desire to move to Seattle, the home of a man she was often photographed with.

Murray’s YouTube account includes a video of her bungee jumping on her 30th birthday. It also includes a video apparently taken inside the Bethesda Lululemon store and uploaded on the day she was killed.

Few other details about Murray’s life have been made public. Montgomery County police are continuing to investigate the crime.