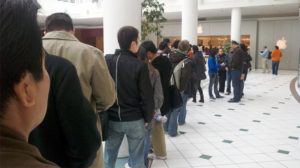 Apple’s iPad 2 has been on sale for nearly a month now, and they’re still selling out around the country.

The Apple stores in Clarendon and Pentagon City are certainly no exception. Customers in Pentagon City started lining up as early as 5:00 a.m. this morning to get their hands on the coveted tablet. By the time the store opened at 9:00 a.m., the only iPads left were the 64 gigabyte version with Verizon connectivity — the most expensive model at $829.

Arlington’s Apple stores get iPad shipments every weekday, according to employees, meaning that the early morning scene at the store today gets repeated daily. Before the store opens, employees will hand out claim tickets for those in line, entitling them to no more than two specific models in stock.