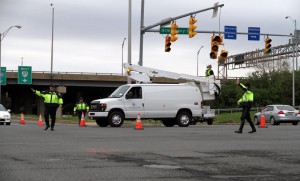 A dump truck reportedly hit a traffic light at the intersection of Army Navy Drive and South Hayes Street this afternoon.

The collision knocked the light from its pole, causing it to dangle precariously over the intersection by an electrical line. As of 1:30 p.m. a county light crew was working to repair the light as police directed traffic at the intersection. A backup quickly formed at the busy intersection, which also serves as a connector to I-395.

No word on whether police were able to find the dump truck that hit the light.