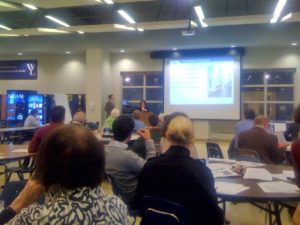 Changes are coming to the rules that regulate signs in Arlington. The county held a workshop at Washington-Lee High School last night to gather community input on reworking the current sign ordinance.

Many business owners believe the current rules are restrictive and confusing. County Board Chair Chris Zimmerman agrees. He says the ordinance is too stringent and focuses on the wrong things.

The board “can be little more liberal in our approach” to signs, Zimmerman said.

Right now, the county is still in the information gathering process. Staff members believe Tuesday’s meeting was productive in coming up with ideas for improvement, and are impressed with the turnout of around 50 people.

“There are a number of different goals to balance, but the feedback will definitely help to develop the ordinance,” said county planner Deborah Albert.

Business owners presented a variety of examples illustrating how the current rules hurt them. Some cited an inability to draw in customers without proper signage. Others claim developers seek out other areas to build once they hear of the regulations. Many said it simply detracts from their efforts at branding. 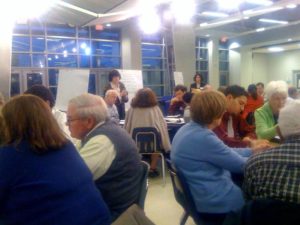 “Businesses need every advantage possible in these tough economic times,” said David Hickey, government relations director at the Alexandria-based International Sign Association. “Visible and well-placed signs are one of the best ways to achieve that.”

Many in attendance voiced concerns over the broad definition of what constitutes a sign. Umbrellas, awnings, certain types of lighting and murals all count, and take away from each business’ allotted sign square footage.

Kim Houghton, who owns the Wag More Dogs doggie daycare in Shirlington, believes she has been bitten by the rules. She went so far as to sue the county over a mural of cartoon dogs on the side of her building. She considers it art, but Arlington County considers it a sign for her business and forced her to cover it up.

“I wanted to see what actions the county is taking on rewriting and reworking the sign ordinance,” she said. From listening to others at the event, Houghton came to the conclusion that “the consensus is that the definition of a sign is too broad.”

A few citizens are calling for less stringent regulations on signs relating to civic events. There are concerns that balloons for events like birthday parties and church functions violate the ordinance, as do posters for sporting events or neighborhood festivals. Those residents suggested improving the process for identifying and certifying small community events.

There were also grumblings about inconsistent enforcement of the current rules, and the need to remedy that problem before going forward with new ones. In January, the County Board passed an amendment giving it more authority to crack down on sign ordinance offenders, but some believe enforcement still lags.

Several attendees noted the ordinance, which was last revamped in 1990, started off with good intentions but simply has gone too far. They assert that colorful, iconic signs, including those considered art, add to a neighborhood and give citizens a sense of community. They say the current restrictions stunt Arlington’s progress by stripping it of character, and preventing it from evolving like other communities. A few citizens suggested re-examining the ordinance every few years and updating it as the community changes.

Arlington County will develop and review recommendations for changes to the sign ordinance throughout the summer, and hopes to have the updates hammered out by this fall.