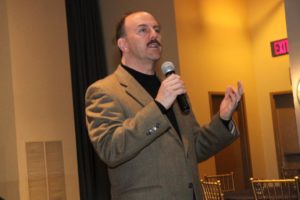 What’s on the mind of local entrepreneurs? A lot, as it turns out.

On Thursday night Arlington County held a small business ‘listening session’ at Clarendon Ballroom. More than 50 business owners showed up to tell county staff what they like and don’t like about how the county treats small businesses.

The event was part of County Board Chair Chris Zimmerman’s year-long push to make Arlington more small-business-friendly. Zimmerman gave the opening and closing remarks at the event, but it was county planning and economic development staff who led the group discussions that were the evening’s main substance.

Among the things business owners liked about doing business in Arlington were the friendly personal interactions with county employees, the frequent county programs that teach you how to create a business plan, and the relative ease of running a home-based business. As expected, however, complaints far out-numbered compliments.

There was discussion of the advantages larger businesses have over smaller businesses when trying to navigate the county’s regulations and talk of loosening regulations preventing small businesses from participating in certain citizen-oriented programs. By and large, however, the discussion focused on three areas: clarity and accessibility of information, taxes and fees, and the county’s controversial sign ordinance. 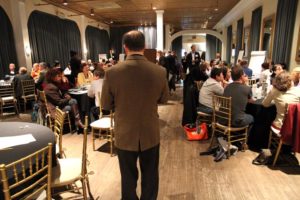 Business owners said the county could do a better job grouping business formation resources on its web site. It would be especially helpful, people said, if the county could create step-by-step guides for the various types of businesses. For instance, the county might list the various permits necessary to open a restaurant.

One restaurant/bar co-owner said he owned a bar in the District and was a former Arlington County employee, but he still had difficulty with the permitting process. The live entertainment permit process in Arlington, he said, was “astronomically different” than in D.C.

Taxes and fees were another lively topic of discussion. Business owners lamented that they’re charged fees for business licenses based on their gross revenue, rather than on their profits. That puts large, low-profit-margin businesses at a disadvantage, some said. Business owners also decried the various increases in taxes and fees levied over the past couple of years.

“Sometimes it feels like as an Arlington business, we’re the ATM machine for Arlington County,” the owner of a small grocery store said. Other business owners specifically criticized Arlington’s business tangible property tax, which forces businesses to pay a percentage of the value of their computers, furniture and other business property. While every locality in Virginia has the tax, business owner said it actually discourages investment — a “disincentive to do the right thing.”

The most-talked about issue of the night, by far, was the county’s much-maligned sign ordinance, which prevents businesses from using certain types and sizes of signage to promote their business. Owners said the ordinance was too restrictive — a detriment to business in Arlington.

Why should the county prohibit sandwich board-style signs in a busy commercial area like Clarendon, shop owners asked. Why are a real estate agent’s balloons considered a prohibited “moving sign” when they’re permitted in most other jurisdictions, and why can some real estate signs only be displayed on weekends, a Realtor wanted to know. Others asked about inconsistencies in the ordinance that permit certain signs on one side of a building but different types of signs on another side.

In addition, some asked why couldn’t some effort be made to subjectively decide which signs to permit based on their aesthetic qualities, since aesthetics is what drives the regulations in the first place. That brought up the topic of the Wag More Dogs mural, which sparked a contentious lawsuit between a business owner and the county.

“People here love art and expression until it becomes commercially viable,” one entrepreneur opined. “I don’t get it… don’t [we] want successful businesses? It’s over-regulated to the point where you’re constricting creativity and imagination.”

In the past, county board members have said that it’s difficult to regulate signs without some sort of objective criteria.

Arlington officials are in the process of rewriting the sign ordinance to address many of the criticisms against it. On Tuesday, April 12, the county will be holding a public workshop about the sign ordinance at the W-L High School cafeteria. From from 7:00 to 9:30 p.m., county staff will discuss the rewrite process and ask for suggestions on how to make the ordinance better. Attendees at Thursday’s meeting were encouraged to attend.