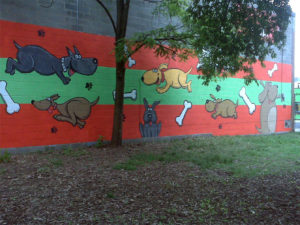 (Updated at 1:55 p.m.) Wag More Dogs, the doggie day care business that has been engaged in an ongoing dispute with the county over a large mural facing the Shirlington dog park, has filed a lawsuit against Arlington County and county zoning administrator Melinda Artman on the grounds that Arlington’s sign ordinance violates the First Amendment right to free speech.

Wag More Dogs owner Kim Houghton says she commissioned the $4,000 mural, which depicts dogs, bones and paw prints, to beautify the dog park, which her business abuts. But the county zoning office didn’t see the mural as art, it saw it as a 60 foot by 16 foot commercial sign — well beyond the 60 square feet of signage the store is allowed under the county sign ordinance. Had the mural depicted flowers or anything not dog-related, said county regulators, it would be permitted. 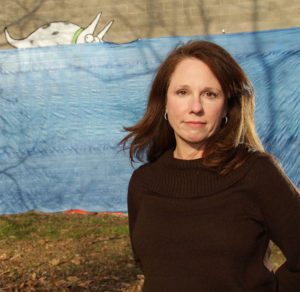 After a long back and forth, Houghton was finally allowed to open her business in September, on the condition that the mural remained completely covered with a tarp. In October, Houghton was told that the sign could be considered a mural if she paid for the words “Welcome to Shirlington Park’s Community Canine Area” to be painted in four-foot high letters.

Shortly after that, Houghton linked up with the Institute for Justice, a Ballston-based libertarian public interest law firm. This morning Houghton and her attorneys filed a lawsuit and asked for a preliminary injunction that would allow the mural to be displayed while the lawsuit makes its way through the courts.

“The decision to file the lawsuit was to protect my freedom of speech and to ultimately prevail in keeping the mural up as it is, instead of turning it into an informational sign for the county,” Houghton said after a press conference at her store this morning.

This morning’s legal filings cite dozens of prior cases, many of which upheld the right of business owners to display signs and artwork.

“What Arlington County is basically saying is that it is allowed to play art critic,” said Robert Frommer, the lead counsel for the Institute for Justice. “We’re very confident of our legal position, because we’re very confident in the First Amendment.”

“My reaction to being sued is that it’s all in a day’s work,” Artman said in a phone interview. “I’ve been sued before, and I’ll be sued again.”

(She noted, however, that she hasn’t been sued since joining Arlington County in 2008.)

Artman said she thought the proposed wording that would have allowed the painting to be considered a mural and not a sign was an “elegant solution,” and added that the Supreme Court has consistently upheld the right of localities to regulate signage.

“We wouldn’t have an ordinance if we honestly felt that we were violating the law and snubbing the constitution,” she said.

County Board Chairman Jay Fisette said the lawsuit was “regrettable.” He also said it was surprising, since county staff thought they had worked out a viable solution to the issue.

“The county has worked hard to accommodate this business owner within the standards of the zoning ordinance that regulates commercial signs,” Fisette said, adding that the lawsuit “does not appear to be a free speech issue, it’s a sign regulation issue.”

The county board has been planning to begin the process of rewriting the county’s sign ordinance at some point in the next couple of months. Fisette wouldn’t say if he thought the mural would be allowed under a revised sign ordinance, but did say generally that the board would like to allow “some additional signage for businesses.”

“Most board members, if not all, have an interest in providing some additional opportunities or flexibility within the sign ordinance,” he said. He added that some sort of objective measure would have to be used to determine which sign are permitted.

“We don’t want to apply our own sense of taste to these issues, we have to come up with a standard and a policy that can be equitably applied across the board,” Fisette said. “That is the challenge because you can imagine a mural that isn’t quite as attractive as this one.”

Fisette said that as a dog owner, he personally liked the mural, but added it ultimately came down to the fact that it was “not consistent with our ordinance.”