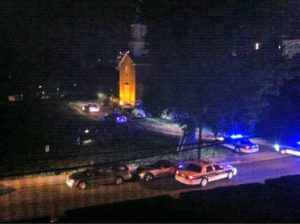 Police were investigating a possible attempted sexual assault just before midnight when a man took off running. After police lost track of him, the helicopter and a K-9 unit were called in to help search a neighborhood just west of Ballston Common Mall.

Around 12:50 a.m., police located the suspect, who took off running again. Officers were able to catch up with him and take him into custody outside the church at N. Carlin Springs Road and N. Thomas Street.