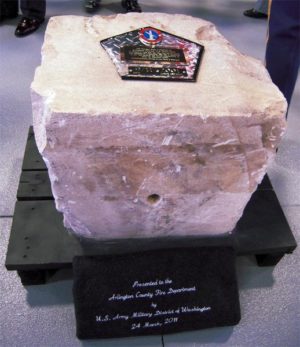 More than 50 members of the Arlington County Fire Department will be traveling to New York this week to participate in a ceremony related to the department’s role on Sept. 11, 2001.

Fire Chief Jim Schwartz, the fire department honor guard and rank-and-file firefighters will help the Military District of Washington present a stone from the Pentagon to the Fire Department of New York. The 2,400 lb. stone, which was recovered from the damaged Pentagon after Sept. 11, will be handed over to the FDNY on Friday at Ft. Hamilton, in Brooklyn. ACFD was presented with a similar stone in March.

Arlington Engine 105, the first engine to arrive at the burning Pentagon 10 years ago, will transport the stone up to New York. A bus will carry most of the firefighters, who volunteered to attend the ceremony.