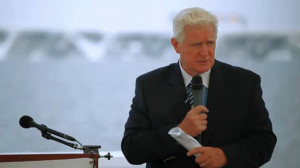 This afternoon the House of Representatives passed a bill that would permit oil drilling off the coast of Virginia.

On the House floor today, Rep. Jim Moran (D-Va.) offered his support for an amendment that would have strengthened provisions in the bill that prohibit drilling in an area that would cause “unreasonable conflict” with naval operations. The amendment failed, and the bill passed 266-149.

“The proposed lease sale would interfere with U.S. Navy operations and Virginia’s commercial fishery and tourism industries,” Moran said in a statement. “National Security and economic growth should trump lining the pockets of big oil executives.”

Moran added that the drilling could interfere with the training of Virginia Beach-based Navy SEAL Team Six, the elite squad that killed Osama bin Laden.

“In May 2010 the [Department of Defense] stated nearly 80 percent of the drilling area proposed to be sold in Virginia, Lease Sale 220, would interfere with U.S. Navy training and operations (including Navy SEAL Team Six),” a Moran press release said.

Virginia Gov. Bob McDonnell (R) offered his support for the bill in a newspaper op-ed this morning.

“America’s energy future must be made more secure and must focus on domestic energy resources,” McDonnell said.