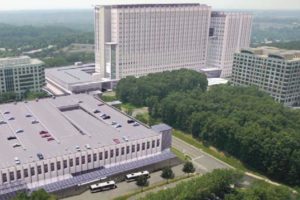 Congressman Jim Moran is asking Secretary of Defense Robert Gates to delay the planned move of Defense Department workers from Crystal City and elsewhere to the Mark Center in Alexandria.

The Base Realignment and Closing Act (BRAC) mandates that the moves take place by September 15, 2011. But Moran is asking Gates to include the Mark Center move among seven BRAC recommendations that the Secretary of Defense will have the authority to delay for up to a year, under a defense funding bill currently making its way through congress.

Virginia Gov. Bob McDonnell is also asking for a delay. Earlier this month McDonnell sent a letter to Gates asking for the moves to be delayed while major infrastructure improvements are made to the Seminary Road exit off I-395, which is expected to handle the traffic from thousands of new Mark Center workers.