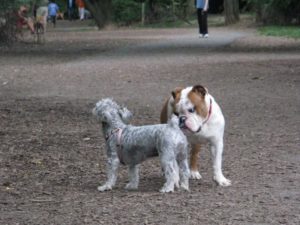 Arlington officials have been quietly listening to public feedback generated by a proposal to ban children under the age of 8 from the county’s dog parks.

At first, officials say, most people who contacted them were against banning kids. Now, with every major media outlet in town running their own version of the story, opinions are about 50/50.

Officials say the ban is far from a done deal. First, it must be cleared by county attorneys — although that seems likely, given that other Virginia localities, like Fairfax County, already ban young children. After it gets the legal go-ahead, Arlington Parks Department spokeswoman Susan Kalish says the matter will only be decided after some sort of community input process.

Kalish says that as of right now, there have been no reported incidents of kids getting hurt in dog parks. Should that change, however, the county is ready to act.

“The key is safety,” she said. “If it becomes an issue we will act immediately.”

The idea of banning young kids — and requiring parental supervision for children between the ages of 8 and 14 — was first suggested in February by the citizen groups that run the Shirlington and Ft. Barnard dog parks, though any action by the county would likely apply to all Arlington dog parks.