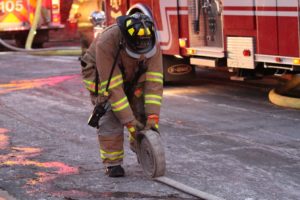 (Updated at 9:45 a.m.) Firefighters rescued a woman from a house fire on N. Carlin Springs Road this morning.

First arriving firefighters found heavy smoke and flames at the front and back of the house on the 5100 block of N. Carlin Springs, said Arlington County Fire Department spokesman Lt. Gregg Karl. One victim had managed to escape the blaze, but another was still trapped inside on the second floor.

“[Firefighters] made an aggressive interior attack and search,” Karl said. “They located the victim and removed the victim via ground ladder from a second floor window.”

The two victims were transported to Virginia Hospital Center. The woman who had been rescued was then flown to Baltimore Shock Trauma for treatment of smoke inhalation, Karl said.

The flames broke out around 1:45 a.m. Northbound and southbound Carlin Springs Road was closed near the scene for much of the morning, as the Fire Marshal’s office investigated the cause of the blaze.