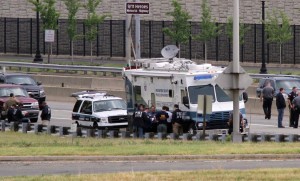 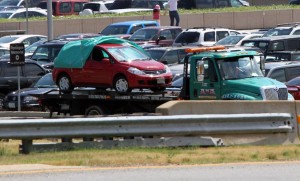 Update at 11:55 a.m. — News outlets have identified the man who was taken into custody as Yonathan Melaku of Alexandria. Melaku is a Marine Corps reservist, according to Fox News.

Update at 11:00 a.m. — The scene has been cleared and all roads around the Pentagon have reopened.

(Updated at 10:55 a.m.) A man has been taken into custody after he fled from police who observed him in Arlington National Cemetery around 1:30 a.m., the FBI said this morning.

The man, who is in his 20s, had a backpack containing materials that police found suspicious, according to Brenda Heck of the FBI’s Washington Field Office. Those materials were found in bags within the backpack, but have since been determined to be non-explosive. Heck says authorities are still performing tests on the materials.

A police interview of the man led officers to a suspicious vehicle near the Pentagon. A search by the Arlington County bomb squad revealed nothing suspicious in the vehicle (pictured above, being towed from the scene), Heck said. She added that no suspicious ‘devices’ have been found.

Authorities are now saying that they believe the man “acted alone,” despite earlier reports that one or two people were being sought by police. Police are still not confirming details about the suspect — reported to be a naturalized U.S. citizen from Ethiopia — except to say that he was uncooperative with investigators.

Washington Boulevard is still closed between Columbia Pike and Route 110. Route 110, which was closed earlier this morning, has reopened. Arlington National Cemetery was closed this morning while law enforcement agencies conducted their investigation but has also since reopened.

Update at 8:10 a.m. — Material has been detonated by the bomb squad. There was a small ‘boom’ that could be heard from the press staging area on S. Joyce Street. Arlington Police, U.S. Park Police, Pentagon Police and the FBI Joint Terrorism Task Force are all on the scene.

Update at 8:05 a.m. — The road closures are producing major traffic issues. Northbound I-395 is backed up all the way to the mixing bowl.

Earlier — Several major roads and on-ramps near the Pentagon have been shut down this morning due to a suspicious vehicle.

Police have blocked off Washington Boulevard between Columbia Pike and Route 110 and Route 110 between I-66 and I-395. Access to the north parking lot of the Pentagon has been limited, we’re told. TV crews, including local outlets and national outlets like CNN, have started staging in a parking lot on S. Joyce Street.

The road closure is remarkably similar to Monday night’s suspicious vehicle incident near the Pentagon. 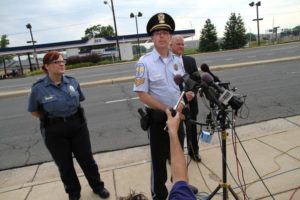 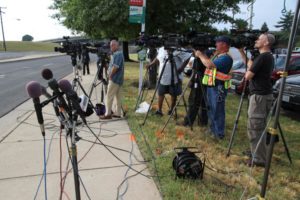 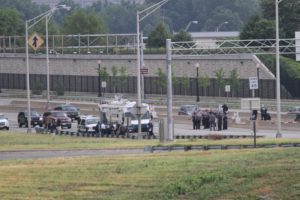 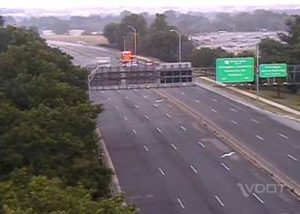