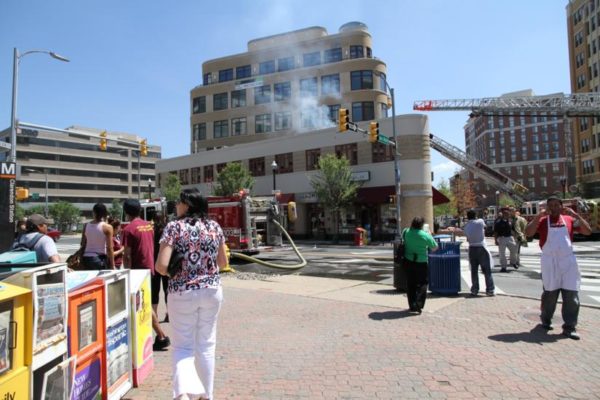 (Updated at 3:10 p.m.) A fire broke out this morning in the Clarendon building that houses Hard Times Cafe and Delhi Club.

Smoke could be seen rising from the roof and billowing out of the entrance to Hard Times as firefighters attacked the blaze. Workers on their lunch break gathered to watch as fire trucks surrounded the building.

The fire broke out in the kitchen of Delhli Club and spread into the duct work, according to fire department spokesperson Lt. Ed Hughes. Only smoke — not fire — spread to Hard Times, he said. No injuries were reported.

The original report of fire was called in by an assistant fire marshal who happened to be driving in the area, Hughes noted.

Roads were closed in the area of Clarendon Metro as emergency responders and county health department inspectors remained on the scene. Dehli Club manager Mir Hussain said the damage is “not too bad.” He hopes to clean up the mess and get health department approval to reopen in a week or so.

Hard Times Cafe owner Doug Welsh said there was some smoke damage inside the restaurant, but no structural damage. He expects the restaurant to reopen at 5:00 tonight.