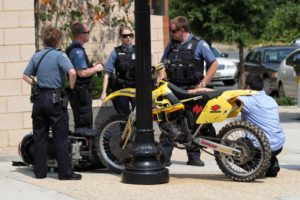 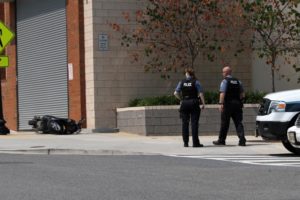 Police are looking for a man who stole a dirt bike in the Shirlington/Nauck (Green Valley) area this afternoon.

The man allegedly stole the green and white dirt bike after being dropped off by another man on a moped. Both the moped driver and the alleged dirt bike thief then tried to flee the area.

Police eventually surrounded the Shelton apartments (3215 24th Street S.) and detained a man believed to the moped driver. He was handcuffed, led to an unmarked police car and taken to the station. The moped was found abandoned outside the building.

The other suspect was reportedly followed by one of the victims, who hopped on another dirt bike and chased the suspect through the streets of the Valley. The victim eventually lost sight of the suspect, but was able to describe his appearance to police.

Update at 2:05 p.m. on 7/8/11 — Two men have been charged with theft of the dirt bike, according to an Arlington County police report item.