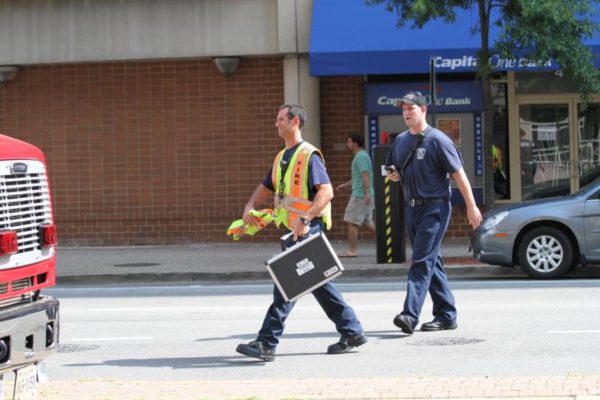 Update at 5:00 p.m. — “This occurred outside the bank near the ATM in the mall,” Arlington Police spokeswoman Det. Crystal Nosal tells ARLnow.com. “It does not appear to be hazardous at this time and was not a robbery or attempted bank robbery.”

Update at 4:20 p.m. — We’re told that tests have revealed the substance to be “non-hazardous.” At least one patient was transported to the hospital, however.

Police are investigating an incident at the Capital One bank on the ground floor of the Ballston Common Mall (4100 Wilson Blvd).

According to initial reports, an unknown man splashed a “caustic liquid” in the face of two female bank employees. The employees reportedly suffered a burning sensation and the inability to open their eyes. Police are looking for the man, who fled the scene.

Paramedics treated the employees and a hazmat team responded to try to identify the substance. At this time the injuries are not reported to be serious.