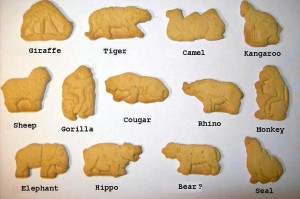 They don’t exactly look like hardened criminals, but some are questioning the persistence of groups of kids who have been selling animal crackers along the Rosslyn-Ballston corridor.

A young animal cracker seller near Market Common Clarendon prompted a citizen to call police this afternoon – apparently out of concern for the child’s welfare – and others, in Rosslyn, prompted a post in our forums.

“For the past few weeks in Rosslyn, I keep seeing kids approaching people on the street and at the outdoor spaces of Cosi/Starbucks, etc. asking them to buy animal cookies for some charity,” the poster wrote. “This seemed suspicious to me as A. there are never any kids in Rosslyn and B. they seem to be cornering people.”

No word on which charity the kids may or may not be working on behalf of.