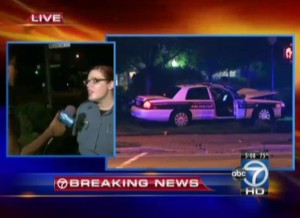 An Arlington police officer suffered serious injuries after a crash in Ballston early this morning.

Around 2:15 a.m. the officer was “responding to a call for a disturbance at a bar” at Ballston Common Mall when his cruiser collided with another car at the intersection of Washington Boulevard and Glebe Road.

The officer is reported to be in serious condition while the driver’s injuries are said to be non-life threatening.

The intersection was closed for part of the morning, but has since reopened. WJLA.com has more.

Update at 1:40 p.m. — Police have released a statement about the incident. We’re told that the officer was responding to a call at Bailey’s Pub & Grill in Ballston. He’s expected to make a full, long-term recovery.

At approximately 2:16 a.m. on Wednesday, July 20, 2011, police were dispatched to a large group of disorderly subjects at the Ballston Mall. Directly after, an accident involving a police officer was reported to the communications center. Medic units transported a police officer to a local hospital with serious injuries. The officer, age 40, has been with the Arlington County Police Department for almost five years. The driver of the other vehicle, a 21 year old woman, sustained minor injuries but was also transported to the hospital.

Traffic was shut down in the immediate area for a significant time period while officers collected evidence at the scene. Preliminary investigation reveals that the police officer was traveling southbound on North Glebe Road, proceeding straight through the intersection. The investigation is still ongoing and more information will be released when available.