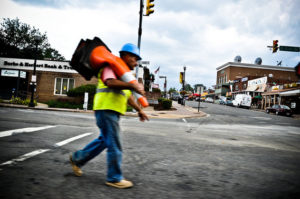 Some South Arlington residents are trying to fight the county on an upcoming construction project.

The county has been planning to redesign parts of Arlington Ridge Road from 23rd Street to South Meade Street. Some of the improvements include work on curbs, gutters, sidewalks and bike lanes. The county cites pedestrian safety as the reason for the revamping.

Some neighbors launched a campaign called “Save Our Streets” to oppose the approximately $200,000 project. Group members say they’re upset because of wasteful spending, the county isn’t listening to them and there’s a lack of transparency.

The group hopes to encourage other residents to write letters to the county requesting a suspension of the project, which has a construction start date set for August 8.  They want more time to give resident input and have it incorporated into the design.

County Manager Barbara Donnellan sent a memo to board members last month saying citizens’ concerns had been evaluated and the plan was adjusted accordingly. The memo concluded that “this project is ready and will move forward with construction.”

The start date was set for August 8 in order to avoid disrupting school children who walk in the area. Once work gets underway, the project is scheduled to take about four weeks.