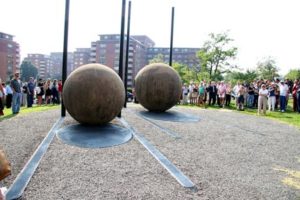 It happens once a year, to commemorate the day (August 1) in 1860 that William Henry Ross acquired the land that later became Rosslyn.

Today, at 9:32 a.m., the shadows cast by the stone spheres and iron poles in Dark Star Park (1655 N. Ft. Myer Drive) will line up with the permanently-installed artistic images of shadows on the ground.

While a grand all-day festival — like the one held in 2009 to mark the park’s 25th anniversary — is not planned this year, the Rosslyn Business Improvement District expects fans of the urban park to stop by this morning to witness the annual event.