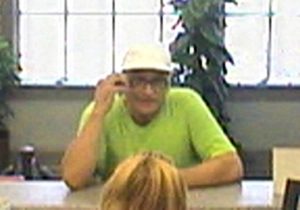 (Updated at 4:35 p.m.) The BB&T bank at 5515 Lee Highway was robbed this afternoon — the second robbery there so far this summer.

The suspect (seen, left, in a surveillance image from today) is described as a 6-foot-tall white male in his late 50’s. The man, who has graying hair under his baseball cap, walked into the bank and demanded money, according to Arlington Police spokeswoman Det. Crystal Nosal. No weapon was shown or implied.

Police believe he’s the the man who’s suspected of three other bank robberies in Arlington this summer, including a robbery in June at the very same bank and a robbery yesterday in Clarendon.