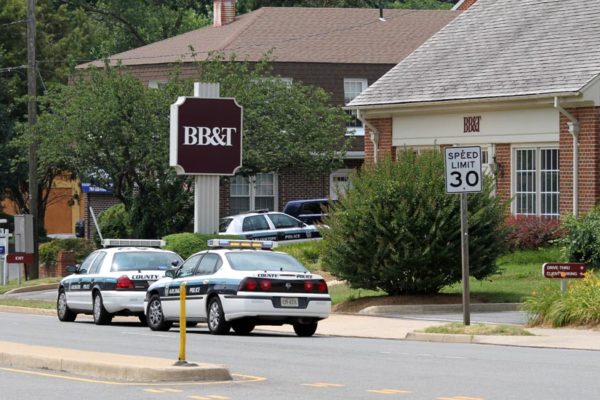 The BB&T Bank at 5515 Lee Highway was robbed around lunchtime today.

The suspect fled the bank on foot, prompting authorities to lock down at least two schools in the area. Parents of Nottingham Elementary and Williamsburg Middle School students received the following message from administrators today.

Today at approximately 12:20 p.m. we were alerted by the Arlington Police about a bank robbery nearby at Lee Highway and Harrison Street. The suspect reportedly left the bank on foot.

As a precaution, the schools “secured the building,” which means all students came indoors from recess, PE or other outside activities. At the same time, we made plans for students to either remain securely in the relocatables or to move into the main building. All exterior doors were locked and classes continued inside. Approximately 30 minutes later, the Police called again to give us the “all clear” and we resumed normal operations.

This is the third reported robbery of a BB&T Bank so far this year. BB&T branches in Rosslyn and Clarendon have been robbed over of the course of the past six months.

Update at 3:55 p.m. — Arlington Public Schools spokesman Frank Bellavia says that the response to the incident did not meet the school system’s definition of a “lock-down,” in which classrooms are locked. Rather, the APS student handbook defines the actions taken today as a “secure the building” response.

Update at 6:55 p.m. — Arlington County Police have issued a press release about the robbery, after the jump. Photos of the suspect are available here. 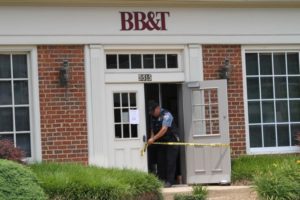 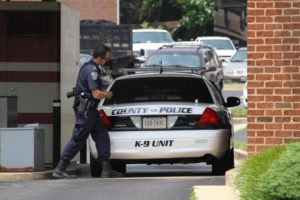 The Arlington County Police Department’s Robbery Unit is seeking the public’s help to identify a man who robbed an Arlington bank this afternoon.

The suspect entered the BB&T Bank in the 5500 block of Lee Highway at approximately 12:19 p.m. on Thursday, June 16, 2011. He displayed a note demanding money, and implied a weapon. After receiving cash, the suspect fled on foot.

The suspect is described as a white male with gray hair between 50 and 60 years old, 6 foot tall and 180 lbs. At the time of the robbery he wore a baseball cap, glasses, a blue and white plaid button down shirt and khaki pants. This robbery and suspect description are similar to the bank robbery that occurred on June 6, 2011.

Anyone who has information about this robbery or the identity of the suspect is asked to call the Arlington County Police Department Tip Line at 703 228-4242, or Detective Donald Fortunato at (703) 228-4197. Det. Fortunato can also be reached by email at [email protected]