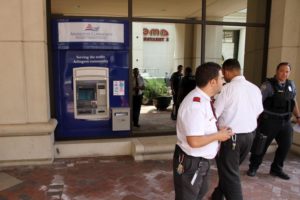 (Updated at 2:25 p.m.) A man has been arrested after a brazen daytime robbery attempt just outside the county government building in Courthouse.

The crime was called into police around 1:10 p.m. Initial reports suggest the man put a female victim in a choke hold after she entered her PIN number into the Arlington County Federal Credit Union ATM in Courthouse Plaza, just steps from the main entrance of the county government building and across the street from the Arlington County Police headquarters.

The woman reportedly ran away while the man attempted to use her ATM account. It’s unclear whether he withdrew money from the machine.

Several people then started chasing the suspect into the residential Lyon Village area, just north of Courthouse, according to police radio traffic and a witness. Police eventually took over the chase and arrested the man in a yard just near Key Elementary school.

One of the people who initially helped to chase the suspect was an employee in the county’s Commissioner of Revenue office, according to county spokeswoman Mary Curtius. The employee heard the victim scream and then gave chase, Curtius said.