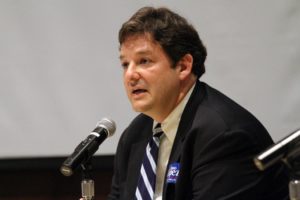 Earlier this week, we asked the two Democratic candidates for the 49th District House of Delegates seat to write a sub-750 word essay on why the district’s residents should vote for them on Tuesday, Aug. 23.

Here is the unedited response from Alfonso Lopez:

My name is Alfonso Lopez, and I’m running for Delegate to uphold our community’s values in Richmond.

Over the last several months, I’ve talked with voters across the 49th District, listening to their concerns and their hopes for Virginia’s future. I’ve been inspired by my conversations with residents along Columbia Pike, where I live with my wife and young son, in Nauck and from Pentagon City and Arlington Ridge to Skyline and Bailey’s Crossroads.

Most Northern Virginians want the same common-sense policies from Richmond – more investment in transportation infrastructure and transit, greater support for education and teachers, a sustainable approach to our environment and our economy, and a progressive, socially-responsible commitment to protect the health, well-being and civil rights of everyone in Virginia.

My mom devoted her life to Arlington public schools, helping immigrant children continue their education after high school. My dad came to America at the age of 19 with just $260. He attended Northern Virginia Community College and then took one course a semester until he graduated from George Mason University.

My parents each worked hard to provide for us. And with the help of government programs they got an education, bought a home, and achieved the American dream.

I am running for Delegate today because Bob McDonnell and Ken Cuccinelli are destroying the social safety net upon which my parents and so many others have relied.

Our next delegate must be a champion for our Northern Virginia values. They must lead on the issues that others cannot, or will not, take a stand on.

I will work to pass a mandatory Renewable Energy Standard and increase investment in green jobs, because we must protect the environment for future generations. I’m dedicated to protect the environment and to bring a clean energy economy to Virginia, and to work with leaders like the Sierra Club and the League of Conservation Voters, who have endorsed my campaign.

As a former State Board Member of the Commonwealth Coalition, I fought against the Marshall-Newman Amendment, which denies civil rights to LGBT Virginians. I will work to repeal the Marshall-Newman and ensure full marriage equality in Virginia, because all of us should be equal under the law. And I will work pass a law to prohibit discrimination based on sexual orientation, because this basic protection should not be at the whim of the Governor. For these reasons, the Virginia Partisans have endorsed my campaign.

I will stand up for a woman’s right to choose and make sure that common-sense family planning and birth control options remain available to everyone who wants them. For these reasons, Virginia NOW and NARAL Pro Choice Virginia have endorsed my campaign.

I will introduce the DREAM Act – because every student should be able to achieve the American Dream. For my commitment to this issue and the immigrant community, I am proud to be endorsed by Virginia New Majority.

Based on my 20-year progressive record and professional accomplishments, I am honored to have earned the endorsement of Governor Tim Kaine, Senator Mary Margaret Whipple, former Delegate Karen Darner, County Board members Chris Zimmerman and Jay Fisette, Sheriff Beth Arthur and the Arlington Firefighters.

I am also proud to be endorsed by the Washington Post.

I have the passion and the practical experience to make the strongest possible case for our values and needs in Richmond.

I spent my life working in public service at the Federal, state, and local level. From my service in the Clinton White House working on environmental justice issues to my work as a member of the Arlington Fiscal Affairs Advisory Commission, I have worked to improve our community.

I served four years as the head of Congressional and Federal Affairs for Governor Kaine where I was involved with every issue and project where Virginia worked with the Federal Government.

When President George W. Bush twice attempted to cut funding for Rail-to-Dulles, I worked across the aisle to keep the project funded. I helped lead the effort to bring together a broad coalition including Democratic Congressman Jim Moran and Republican Congressman Frank Wolf.

When President Bush proposed drilling off of Virginia Beach, I was sent to negotiate with the White House and we were able to stop the proposal.

I’ve built my career fighting for issues of critical importance to the people of the 49th District. With your support, we will bring effective, progressive leadership to Richmond.