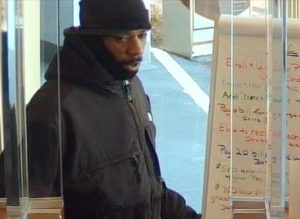 The suspect, seen here in a surveillance photo, has hit eight banks in Montgomery County, two banks in Alexandria and one bank in Arlington.

The Arlington robbery occurred on Dec. 14, at the BB&T Bank at 2947 S. Glebe Road. The suspect passed a note to a teller implying he had a gun, but no weapon was seen.

The suspect’s most recent reported robbery was on July 21, at a SunTrust Bank in Potomac, Md.

“Detectives are asking anyone with information about the bank robberies and/or the suspect to call the Montgomery County Police – Robbery Section at 240-773-5100,” police said in a press release. “Those who wish to remain anonymous should call Crime Solvers of Montgomery County toll-free at 1-866-411-TIPS (8477) or at 240-773-TIPS (8477).  Crime Solvers is offering a cash reward of up to $1,000 for information provided to them that leads to the arrest and/or indictment of the person responsible for these bank robberies.  Anonymous tips can also be provided by typing ‘MCPD’ plus the tip on a cell phone or PDA and texting it to 274637 (CRIMES).”