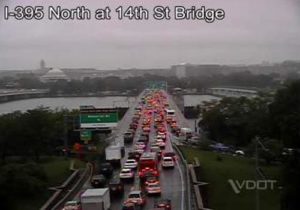 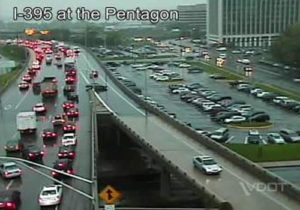 (Updated 12:50 p.m.) The 14th Street Bridge is jammed heading into the District as flooding has blocked several major arteries into the city.

DDOT has reported the ramp to I-395 eastbound is closed at the 14th Street Bridge due to high standing water. Traffic is being directed onto 14th Street. As a result, major delays have formed across the bridge here in Virginia.

Traffic is moving very slowly approaching the bridge. Cars are backed up to Pentagon City on I-395, and police report that on-ramps in the area are also jammed. In fact, we’ve observed cars heading the wrong way on ramps to I-395 in order to get out of the backup. (See traffic camera image, above right.)

Drivers are encouraged to avoid the 14th Street Bridge if at all possible.