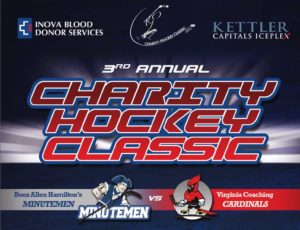 The NHL season doesn’t start for another month, but local fans will be able to get their fill of hockey action this Saturday at Ballston’s Kettler Capital Iceplex (627 North Glebe Road), during the third annual Charity Hockey Classic.

The event, which is being held from 4:00 to 7:00 p.m. on Saturday, will also feature a silent auction, appearances by local celebrities, ‘Mites on Ice’ youth hockey exhibitions and “the ever-popular ‘chuck-a-duck’ contest,” according to a press release. Tickets are $10 for adults and free for kids. Organizers hope to raise $40,000 to purchase a blood testing machine for Inova.