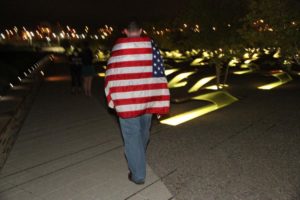 While the softball tournament was canceled due to soggy fields, all other events planned to commemorate the tenth anniversary of the 9/11 terrorist attacks are still on for this weekend, rain or shine.

First up is the 10th annual Arlington Police, Sheriff and Fire 9/11 5K race, which will get underway in Pentagon City at 6:00 p.m. on Saturday. To accommodate the race, a number of roads will be closed between 5:30 and 7:00 p.m., including parts of Army Navy Drive, S. 12th Street, Crystal Drive and the Pentagon South parking area.

Residents should also expect a ceremonial flyover of four police helicopters between 5:45 and 6:00 p.m. The race, which has been growing in scale since its inception, is sold out this year.

“This is clearly our biggest year,” said race co-founder and retired Arlington County Police Officer Matthew Smith. “We’ve had tremendous support, and have a lot of meaningful additions for this year’s race.”

“Over the nine years we’ve probably given out over $350,000” to a number of 9/11 and military charities, Smith added. “The race provide[s] an opportunity give back… It should be a memorable experience for all.” 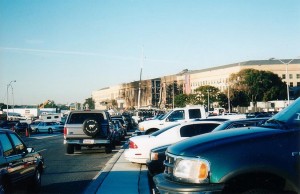 Following the race, at 7:30 p.m., Arlington County will hold its official 9/11 tribute event at the Air Force Memorial, which overlooks the section of the Pentagon that was struck by American Airlines Flight 77.

The tribute, which is free and open to the public, will feature the U.S. Air Force Band Brass Quintet Ensemble, the Joint Armed Forces Color Guard, the Arlington County Combined Honor Guard, Wakefield High School’s a capella choir “The Madrigals,” Macedonia Baptist Church Music Ministry, and a commemoration by the Pentagon Memorial Fund’s Jim Laychak. Transportation and parking information is available from the county’s web site.

Then, at 9:37 a.m. on Sunday, Sept. 11, bells will peal at the old Hume School (1805 S. Arlington Ridge Road) to mark the exact moment when terrorists flew the jetliner into the Pentagon. Oakridge Elementary students will ring the school’s bell 184 times — once for each victim of the attack. The school, now used as the Arlington Historical Society Museum, is hosting a new Pentagon 9/11 Exhibit, which includes the charred Pentagon heliport sign that was 50 feet from the point of impact.

It may be a publicity stunt, and it may not even be ethical, but the Carvel store in Clarendon (3222 Wilson Boulevard) is hosting a giveaway for the agencies that responded to the Pentagon on 9/11. The store will be giving away free ice cream to anyone who shows their badge at the store on Sunday.

“I am so proud to live in a country where we have such heroic people committed to keeping us safe,” Carvel Arlington owner Tuhin Ahmed said in a statement. “This is just a small way for me to honor these heroes and let them know that their sacrifices are appreciated.”

Discovery is sponsoring the event, which will include a panel discussion with the Pentagon Memorial Fund’s Laychak, Arlington School Board Chair Abby Raphael, Arlington Fire Department Chief James Schwartz, Discovery executive Scott Kinney and Kathy Dillaber, who worked in the Pentagon where the flight crashed. Dillaber lost her younger sister and 23 colleagues on 9/11.