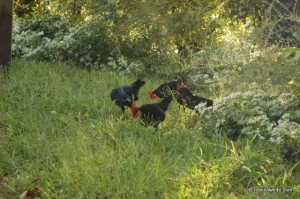 On a fishing expedition to the Roaches Run Waterfowl Sanctuary, located between Crystal City and the GW Parkway, local fly fishing guide Rob Snowhite made a surprising discovery: a group of wild chickens that has apparently taken residence in the sanctuary.

Snowhite wrote on his blog this morning that shortly after parking in the Roaches Run parking lot (across from Gravelly Point, the lot is frequented by limo drivers waiting for airport arrivals) an animal control officer arrived on scene and started trying to round up the wily birds, who seemed determined to not be evicted from their South Arlington home. To assist the effort, Snowhite and his fishing buddy got out their nets and joined the chase. After 20 minutes of fruitless effort, the trio gave up — an outcome that was cheered by some bystanders who told the men to leave the chickens alone.

The two fishermen continued on with their fly fishing mission at the sanctuary, marveling at the prospect of wild chickens living near an urban pond but lamenting the unsuccessful chicken chase.

“There won’t be any fresh roast chicken at Ri Ra tonight,” Snowhite quipped.