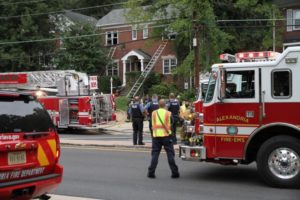 Update at 4:20 p.m. — Due to some miscommunication, police are apparently scrapping plans to open up one lane in each direction, and will only be opening the southbound lanes for now. They hope to reopen the northbound lanes of Glebe Road near the fire scene around 5:00 p.m.

Update at 3:55 p.m.— The fire is out and most emergency responders are clearing from the scene.

South Glebe Road is being shut down just east of Arlington Ridge Road due to a house fire.

Arlington and Alexandria firefighters are on the scene of the fire, on the 3200 block of S. Glebe Road. The lone occupant of the house reportedly made it out safely.

Drivers should expect significant traffic issues in the area.

One of the fire department units responding to the fire was involved in an accident at the intersection of S. Glebe Road and West Glebe Road.